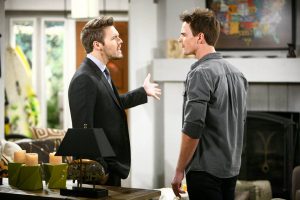 Hello Bold & Beautiful fans!  Today’s episode was not very interesting.  The show started out today with Wyatt and Sally.  It is morning time after a very long night of love for the new pair.  These two really seem to have the chemistry going.  They are both down on their luck at the moment, but all of that changes when Sally gets a call from Eric Forrester.

The next scene begins with Eric, Quinn, & Thorne Forrester, along with Hope in the conference room.  Eric has decided that Sally deserves a second chance.  He feels that she would be a good fit for the company.  Well not just the company, but Hope for the Future campaign to be more specific.  You can tell immediately that Hope does not like this move at all.  Nonetheless, they all agree to treat Sally good at Forrester.  Hope, however, brings up Sally’s past when she stole designs from Forrester Creations last year.  Sally was desperate at that time because Bill Spencer was trying to ruin Spectra Fashions.  Eric tells the group that everyone at that table have had second  chances, and he thinks Sally deserves a second chance also.

Now, the call that I mentioned in the first paragraph takes place in this scene.  Wyatt and Sally are happy and talking on their little make shift Chinese bed.  Then Sally’s phone rings.  When she picks the phone up, Wyatt tells her that is Eric Forrester’s number.  Sally answers, and says Mr. Forrester.  Eric tells Sally the good news.  Eric has found a place at Forrester Creations for her.  Eric goes on to ask her how soon she could get to Forrester Creations, and an excited Sally tells Eric that she will be over in the next 30 minutes.

Meanwhile, just outside the Forrester’s closed door, a frantic Pam is ranting about Hope being this close to Liam.  Pam’s boyfriend ,Charlie walks in and asks Pam what has gotten her so upset.  Pam tells him about Hope asking her to leave the room on yesterday’s episode because Hope and Liam were having a conversation.  Pam is really unnerved by this.  Charlie reminds Pam that Hope is a good person.  That doesn’t help Pam at all.  She rants on about marriage and what marriage means to her.  Even though Pam has never been married before, he sister Stephanie, now deceased, Pam tells Charlie that she can remember how Stephanie held on to her and Eric’s marriage.  This leads Pam back to Steffy, Liam, and Hope.  Pam tells Charlie that Steffy, who is named after her sister Stephanie, never gave up hope that she and Liam would reunite with each other.  Pam tells Charlie that Steffy never loft faith.  Hoping to cheer Pam up, Charlie comes in with two little dolls.  Pam is not cheered up by this, she takes it that Charlie is making fun of her quirky beliefs.  Pam tells Charlie that just because her mother kept her in a preadolescent state, marriage is important to her.  I don’t know about you guys, but I can hear wedding bells soon for Pam and Charlie.  They do make the perfect couple.

The next scene takes place in Katie’s office.  Katie and Thorne seem to be getting along well because they open this scene with a slow, passionate kiss.  Thorne gives Katie the update about Sally Spectra coming to work for Forrester Creations.  Katie laughs and thinks Eric would never hire Sally.  Thorne also tells Katie that Sally and Wyatt seem to be a thing.  Katie thinks all of this is a joke , but when she sees the serious look on Thorne’s face, she says you aren’t kidding are you.  Thorne tells her no he is very serious.  Katie tells Thorne that Wyatt’s happiness is still important to her, and that Wyatt is a sweetheart.  However, the look on her face when she finds out Wyatt is moving on says that she may be just a tad bit jealous.

Sally comes to Forrester to meet with Eric, Quinn, and Hope.  Eric does bring up the theft of their designs, but that he did understand because Bill Spencer had tried to destroy him in the past also.  Eric also told all of them that he is sure that incident will never be talked about again.  Eric tells Sally welcome, and Quinn tells Sally she better treat Wyatt right.  Sally responds to Quinn how could anybody treat Wyatt bad.  I am not sure, but I think Sally meant this toward Hope.

The next scene takes place at Wyatt’s beach house with Liam showing Wyatt all the pictures he has of Kelly.  Wyatt asks Liam the ultimate question.  How long will it be before he and Steffy get married since Kelly was born out of wedlock.  Liam explains to Wyatt that Steffy wants to wait before they get married.  Steffy has convinced Liam that she wants to wait until they get the whole parenting thing of baby Kelly down.  Liam goes on to tell Wyatt that he understands that because at the time, baby Kelly has brought many sleepless nights at the cliff house.  Then Liam turns around to the new picture hanging over the mantle.  Liam asks Wyatt if he was redecorating.  Wyatt then tells Liam about meeting Sally down at the beach bar, and that she didn’t have a place to go, so he convinced her to stay with him.  Wyatt tells Liam that he likes Sally and their “hanging out.” Liam tells Wyatt that he figured that out, but Wyatt tries to reassure Liam that is not the only thing he and Sally do.  I think Wyatt is falling for Sally Spectra like a runaway train.  Wyatt then explains to Liam that their relationship sort of started out with a bang, lol.  Liam knows what Wyatt is referring to.  Liam tries to warn Wyatt that Sally is not in a good place right now, and that he feels uncomfortable with Sally working at Forrester Creations because she may decide to hurt somebody, namely Steffy, baby Kelly,and Hope.  Wyatt reassures Liam that Sally is not a dangerous person, but he will make sure to look out after her.

The closing scene is with Hope and Sally.  Sally tries to make peace with Hope by offering her some of her design sketches that she had drawn a while back.  Sally wants to know what Thorne’s opinion would be.  Hope flat out refuses to take Sally’s sketches.  Hope then starts reminding Sally to not be taking pictures of Thorne’s designs or any for that matter.  Hope is still throwing up the theft of Forrester Creations designs by having Cocoa, Sally’s sister and last years intern when Cocoa wore a hidden camera in that broach.  Sally is still nice with Hope, but Hope just doesn’t like Sally at all.  Hope tells Sally to make herself clear, Sally will never be a designer for Forrester Creations.  Hope then throws the next punch at Sally by telling Sally that if it were up to her, she would send Sally packing.  Harsh Hope!!!

Well guys this is my recap for today.  This summer looks like it is going to be a Cool Summer in Los Angeles.  Okay, tell me what you guys think.  What do you see taking place this summer?  Will Liam and Steffy remarry again to make their family complete?  Will Bill get his way and he marries Steffy?  So many possibilities with this exciting show.  I love it!