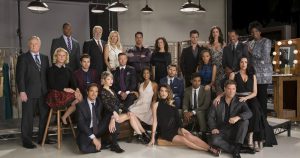 Good afternoon bloggers.  So who out there is a big fan of the hit soap opera show on CBS, The Bold and the Beautiful?  Well I am I just love that show.  If you tuned into Friday’s, May 25th episode, it left us in suspense about Liam marrying Hope Logan.  Will this wedding take place or not?  The subject I want to talk about is the relationship dynamics for the families on this show.  You basically have 3:  the Spencers, the Forresters, & the Logan girls.  At one point in each of these actor’s lives, marriage within this bunch is almost insestual.  Hold on fans because I am about to dish on who is married to who. 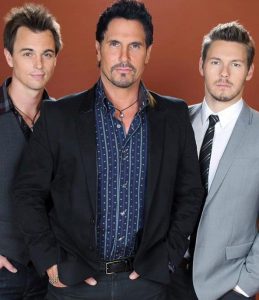 The Spencer family contains 3 very important roles on this show.  There is Bill Spencer (the dad); Liam Spencer (son of Bill), and Wyatt Spencer (son of Bill).  These Spencer men simply cannot stay away from  the same women, Steffy Forrester (daughter of Ridge Forrester),and Hope Logan (daughter of Brooke Logan Forrester).  Let’s break this family tree down to figure out all of the relations of this marrying clan.

Apparently, Bill Spencer Jr. (Bill today) came to Los Angeles after his father had passed away.  Ruthless and deviant Bill always was trying to get Forrester Creations for himself.  This is when Bill met Katie Logan.  Instead of seducing Katie like Bill usually would, he decided to get to know her.  Bill and Katie fall in love and got married.  Nevertheless, Bill started an affair with none other than Steffy Forrester.  Steffy wanted Bill all to herself, and she demanded for Bill to leave Katie, saying Katie was not right for him.  When Steffy’s mom, Taylor, started counseling Bill and Katie, she discovered Bill’s affair with Steffy. She was able to break Bill and Steffany’s relationship up.  When Taylor told Katie about Bill’s affair with Steffy, Katie had a heart attack.  Katie ends up reconciling with Bill, after she had divorced him.  The couple renewed their vows to each other.

Liam Spencer, the son of Bill Spencer Jr. and Kelly Cooper.  Unfortunately, Kelly passed away, but before she did, she told Liam to move to Los Angeles to find his father.  The two finally for a bond with each other, and they had a close father and son relationship.  Liam became involved with Katie’s niece, Hope Logan.  Hope ended up being the one true love of Liam.  However, Bill did not like Liam with Hope, and he concocts schemes and plans to break the two up.  This is when Liam and Steffy met.  Liam saved Steffy from drowning in the bath tub.  So now Liam and Hope were planning to get married, but Bill still thought Hope was not suited for Liam.  He turned to Steffy asking her to kiss Liam.  This kiss was at Liam’s bachelor party of all places, and poor Hope saw it.  She was devastated and gave Liam back the engagement ring.  Now Bill told Liam and Steffy to come join him in Aspen where he had a cabin.  They of course did.  Hope was there watching all along, but was detained by none other than Bill. Bill even arranged a wedding for Liam and Steffy so the two were married.

Now you have Liam and Steffy, which Steffy was Bill’s ex fling.  Liam is married to Steffy now which was really trouble in itself.  Hope was with Thomas Forrester at the same resort as Liam and Steffy.  Of course they saw each other.  This is when Steffy gets hurt in an ATV accident.  Bill broke into Steffy’s medical records and changed them to say that Steffy had a blood clot in her head that would burst if she was under stress.  Liam felt obligated to stay with Steffy.  Somehow through all the twists and turns, Liam does marry Hope finally. 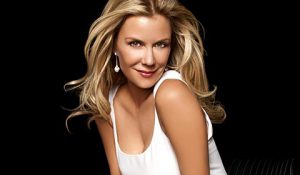 Well Bill starts having fantasies about Katie’s sister Brooke.  Brooke is the mother of Hope Logan, and now the wife of Ridge Forrester.  To make a very long story short, Bill was with Steffy and Brooke while still being married to Katie Logan.  Then Liam was married to both Hope and Steffy.  Remember Bill had an affair with Steffy.  Years later Bill and Katie divorce, Bill ends up with Katie’s sister Brooke.  Katie ends up with Steffy’s father Ridge Forrester.  This is really turning out to be one big twisted web.

Next, Wyatt Spencer comes on the scene as Bill’s other son.  As time goes on, Wyatt ends up with Hope first.  The two of them were married until Hope miscarried their child and blamed it on Wyatt’s mom.  They divorce, and then Wyatt takes a liking to Steffy while Liam was being held prisoner by Wyatt’s mom.  She is the devil folks.  Wyatt proposes to Steffy and the two of them get married.  Wyatt breaks free and finally comes home after Wyatt and Steffy’s wedding ceremony.  Liam had always been Steffy’s love, and when Liam filled her in on why he was gone and why he had not made contact with her.  Steffy and Wyatt divorce, and Liam and Steffy are back together again ready for marital bliss. 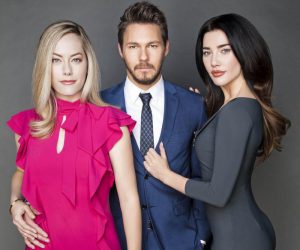 To get you all up to date, now Liam has divorced pregnant Steffy because he thinks Steffy is cheating on him with his father Bill again.  Bill thinks he’s in love with Steffy, and with the help of his right hand man Justin, makes it seem to Wyatt that Bill and Steffy are still a couple.  This is where we leave off from Friday’s episode.  When Liam divorces Steffy yet again, he proposes to Hope, and Hope’s mom Brooke plans their wedding saying that Liam and Hope should have been married years ago if not for the interference from Bill and Steffy.  Wyatt, Liam’s brother and best man, cannot take the pressure anymore and demands to talk to Liam.  He reveals the truth.

Do you think Hope’s heart will be broken again or do you think Liam really does love her enough to marry her, despite Steffy being pregnant with his daughter, which Steffy plans to name Kelly after Liam’s mom?  I guess we will get to see this on Monday.

So bloggers I have filled you all in on who is who, and who marries who, and who divorces who.  Can’t wait to see how this all plays out.