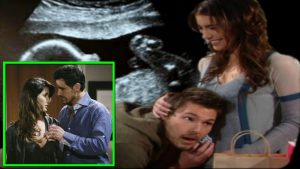 Good evening Bold & Beautiful fans!! Well today’s episode would make you think the emotion and love going around is real, and not just a soap opera drama. Today’s episode begins with Liam, Steffy, and baby Kelly. Liam and Steffy are just in awe over their new bundle of joy. Ridge, Steffy”s father continues to look through the window at the couple, and his new precious granddaughter.

Dr. Phillips says that she will have to check baby Kelly out soon and leaves Liam & Steffy to let go of their precious cargo. Then Ridge enters the room, and he tells Liam and Steffy he had been looking in from the window outside. Steffy told him that she knew because the nurse told her. Liam pretends that Kelly is talking to him when he introduces Kelly Spencer to her proud grandfather Ridge. Liam acts as if baby Kelly says to him, Ridge Forrester?, and Liam replies yes that is his name. Ridge tells Kelly that she is the most beautiful little girl he has ever seen. Ridge then says besides your mother. 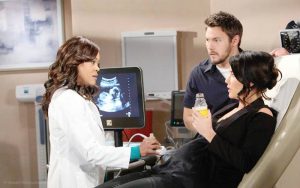 Dr. Phillips reenters the room, and tells Liam and Ridge that she was going to take baby Kelly now to check her up, and would then be back to check on the mommy. Ridge and Liam walk out. Ridge then calls Brooke and the rest of the Forrester clan to let them know that Steffy and baby Kelly are just perfect. Ridge tells Brooke he is grateful for telling him that Kelly would be okay. She smiles and says I told you they would. Brooke tells Ridge who all is there at Forrester waiting on the baby news, she then tells them all that both Steffy and Kelly are both fine, and they all start yelling congratulations grandpa,lol. Brooke asks Ridge about Liam. Ridge told Brooke that he is full with emotion, and overwhelmed at becoming a father and what all that means now. Brooke tries to be supportive and say she is happy for both of them.

Liam returns back to outside of Steffy’s room, and he finds Ridge standing out there. Ridge talks to Liam seriously about what he must do now for both Steffy and Kelly. He tells Liam how much both of them need him. Liam smiles, and says yes he knows because Ridge tried to tell him there was nothing going on between Steffy and Bill. Ridge tells him that he was just trying to be protective of his little girl like Liam will be protective of his little girl. Liam walks back into Steffy’s room to find her dozing off. Steffy wakes up and smiles at Liam. Liam tells Steffy that she needs to get some rest now, and he tells Steffy that’s why they call it labor bringing a baby into this world. Liam then asks Steffy how she is doing, when Dr. Phillips brings Kelly back into the room. Dr. Phillips tells Liam and Steffy their daughter is a picture of perfect health. She gives Kelly back to Steffy and tells her she will be back to check on her in a little bit. 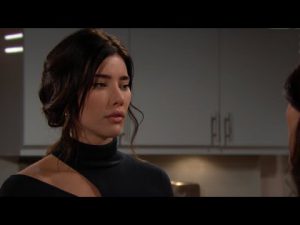 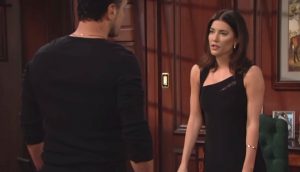 When Bill walked out the door, Steffy slammed the door, and that is when she tripped, fell, and her water broke. Liam instantly gets a little loud, and Steffy tells him no he was not going to act that way in front of her or their daughter. Liam calms himself down and tells Kelly he is so sorry that her dad is just so loud. Steffy assures Liam that she was going to tell him everything from here on out. Steffy then looks at Liam and tells him that she loves him, and Liam tells her that he loves her too. Steffy says you do? Liam said of course he loves her. Everything seems to be peachy keen with the Spencer family now.

Brooke, Hope, and Pam are talking back at Forrester Creations amongst each other. Pam tells Brooke and Hope that she was also a premature baby, 3 weeks premature. Pam tells Brooke that her mother’s water broke at a dinner party for her father’s business associates, and that she really didn’t think her mother ever forgave for that, laughing. Pam walks out, 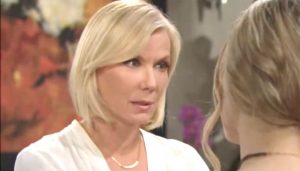 and it is just now Brooke and Hope left. Brooke asks Hope how she is doing. Hope whines in that sad pathetic voice of hers, and says she is okay because something could have really been wrong with the baby. Hope also tells Brooke that things didn’t turn out how she wanted them because if they had, she would now be Mrs. Liam Spencer. Hope tells Brooke then that she has a sick feeling inside her stomach that she has lost Liam today.

Okay fans that is what happened today on the Bold and the Beautiful. Tell me what you thought about today’s episode. Are you secretly routing for Hope or Steffy? Cath you tomorrow with my next blog about tomorrow’s upcoming episode.