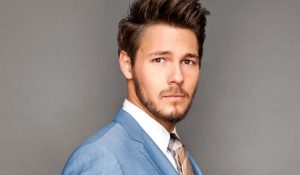 The Bold & Beautiful fans hello!!!!.  Well if you got to watch today’s episode, you could feel all the love and support for Steffy & Liam’s little Kelly.  I look forward to seeing what Liam’s decision will be.

Today’s episode began with the Forresters gathering at Forrester Creations.  The people that were there included Eric and Quinn, Pam, Ridge’s brother, Brooke, and of course Hope.  Hope has so much grace inside of her.  She is such a role model and example of how people should feel.  Anyway, the entire bunch was discussing Steffy going into labor early.  Everyone had well wishes for the baby and Steffy to be okay. 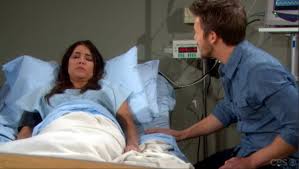 The scene then jumped to Steffy & Liam in the delivery room.  Steffy was pushing so much that she literally became exhausted.  Nevertheless, Steffy is a fighter and she kept going.  All the while, Ridge was looking through the window.  He feels emotional when he sees Steffy crying.  His immediate thought was that something was wrong with the baby.

In the meantime, the Forrester clan were all standing around wondering if there was any news.  So Brooke steps out and calls Ridge.   Ridge is really worried about baby Kelly.  Brooke told him that everyone was there for support for Liam and Steffy.  She asked Ridge if he wanted her to come to the hospital.  However, Ridge tells Brooke no she doesn’t need to come because none of the nurses would tell him anything.  Ridge said “it’s like they know something is wrong.” Brooke tells him to not worry and he would be holding his granddaughter very soon.  Brooke tells Ridge goodbye and she loves him, and Ridge just hangs up.  He did comment before their conversation ended that “by the grace of God,” Kelly would be fine.

Meanwhile, back at Forrester Creations finds Eric, Quinne, and the little brother all talking about what a trooper Steffy was, and if she put her mind into being like she is in the board room, she was running that labor room.  It shows Brooke, Hope, and Pam in a group together talking amongst themselves.  As usual Hope shows her grace and maturity by keeping a positive attitude and that Liam and Steffy would be holding baby Kelly very soon.  Hope also says that when Steffy and baby Kelly return home they would have to do something nice, like a baby shower, for Steffy and the baby.  However, you could see the hurt in Hope’s eyes because down deep she knows that Liam will go back to Steffy and baby Kelly. Quinn says it will be interesting to see how things turn out, meaning will Liam go back to Steffy or will he marry Hope.

Back at the labor room, Steffy continues to push, but she is in a lot of pain and is very tired.   Also, she never even got an epidural.  The doctor kept monitoring the

baby’s heart rate, and it continued to decrease.  The doctor tells Steffy that she need to deliver this baby as soon as she had her next contraction.  Liam and Steffy are both scared, but when Liam looks at a worn out Steffy, he tells her “you got this.” That really put Steffy in high gear so on the next push, baby Kelly is born.  Unfortunately, they did not hear her crying.  They both kept asking what’s wrong with our baby.  Thankfully, the doctor gets baby Kelly to cry.  Liam and Steffy are both over the moon with joy.  Steffy gets to hold baby Kelly, and she and Liam continue to kiss on her, and show her little tiny baby feet.  Liam tells Steffy she is a super star, then it shows Liam and Steffy kissing.  Ridge is outside the door, and continues to look through the window at Liam, Steffy, and baby Kelly.  He is filled with such emotion and happiness.

The last few minutes were about the perfect little family Liam and Steffy now had.  Liam tells Steffy that he so proud of her, and Steffy turns around and says she is proud of Liam.  There were a lot of tender moments at the end showing Liam, Steffy,  and baby Kelly.

I hope this catches you fans up to date on what is happening on the Bold and the Beautiful.  I will be back tomorrow with another review.  Stay in tune and let me know what you guys think should happen.  Do you think Liam should go home with Steffy and the baby to repair their broken marriage, or will Liam go off and marry Hope instead.  Those two do have a lot of history together you know.

Thank you for tuning in this evening, and until my next blog,