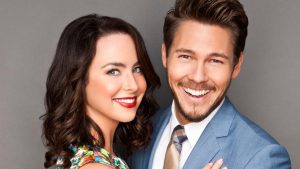 Hello once again Bold & Beautiful fans.  Well, based on today’s episode, it seems like everything seems to be lining up for Bill.  Will Steffy really delay her marriage to Liam to protect her mom, or will she tell Bill where he can go?  I guess we will have to find that answer next week.

Today’s episode starts off with Liam and Hope still talking in Hope’s office at Forrester Creations.  Liam feels so responsible for how Hope is feeling.  Hope tells Liam it wasn’t his fault that he was duped by his dear old dad once again.  Hope says that she is happy for Liam, Steffy, & baby Kelly, but she still can’t help to think how close she was to getting married to Liam.  Hope is down, but she assures Liam that she will be okay.  Hope even asked Liam to come back to Forrester, and help her finish her new campaign for Hope for the Future.  Hope had told Liam when they first broke up that she couldn’t stand to be around him in the office everyday.  Liam asks Hope what changed her mind.  Hope tells Liam, well we’re talking now, and besides she really could use the help.  Liam tells Hope that he can maybe act as a consultant, but he didn’t think it would be fair to Steffy if he came back and worked with Hope full time.  Liam also told Hope that he would have to run everything by Steffy first.  Hope agrees.

The next scene involves Zander and Emma, Forrester Creation’s new interns.  The two of them have become very close very fast.  In our time, they only met last week, lol.  Zander apologizes for Maya for distrusting Emma when Maya caught her taking those pictures of Hope’s new line.  Emma said he had nothing to be sorry about, and neither did Maya.  Emma feels horrible that she did this, but reassures Zander that it wasn’t because she was trying to spy or take Hope’s designs anywhere near her uncle Justin or sleezy ole Bill.  Emma tries to make fun of the situation by joking with Zander.  Emma tells Zander that she must have been not paying attention on orientation day about taking pictures.  Emma tells Zander that she has always been a fan of Hope’s , and that just as soon as she was old enough, she applied for the intern job at Forrester Creations.  Then Zander is looking up something in an employee handbook.  Emma asks Zander what he was looking for, and Zander replies to Emma that he is looking to see if there are any rules about employees dating each other.  Then Zander walks over to Emma, and the couple share their first romantic kiss.

Steffy is alone at the cliff house now because Bill has gone.  Steffy keeps thinking about what Bill said to Steffy about sending Taylor, Steffy’s mom to jail, if Steffy told anyone anything.  Bill has made his point clear to Steffy that it only takes one word from him, and Taylor would spend the rest of her life in prison.  At that moment there is a knock on Steffy’s door.  When Steffy goes to the door and opens it, Taylor is there, and she is in a wreck.  Taylor keeps on crying almost having a nervous breakdown about her fear of going to jail because she was the one who shot Bill.  Taylor keeps thanking Steffy for asking Bill to not send her mother to jail.  Since Steffy was the one asking, Bill obliged, but you know it can’t be out of the goodness of his heart.  Bill is now using this information as blackmail against Steffy so she won’t go through with marrying Liam.  Once Taylor leaves, Steffy is shown folding baby clothes when Liam comes home.  Liam told Steffy, good news, Carter said everything was okay, and that he understood the situation.  Steffy asks Liam if he had been with Carter the whole time, and Liam tells her no, he had talked to Hope.  Liam tells Steffy about Hope asking Liam 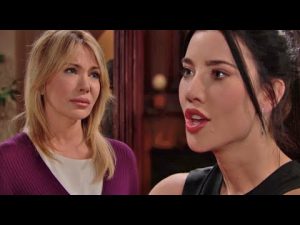 to come back to help finish her Hope for the Future campaign.  Steffy said that she thought Hope had told Liam it would be too much to work with Liam now since Liam has reconciled with Steffy.  Liam tells Steffy yeah I know, but told Steffy that Hope was okay with the idea.  Steffy asks Liam what he told Hope.  Liam tells Steffy that he told Hope he could come on the campaign as a consultant, but would need to talk to her first before he made any other kinds of commitments to work with Hope side by side.  Liam then tells Steffy there is a good idea from working with Hope at Forrester Creations.  Steffy asks him what that good idea is, and Liam tells Steffy that with him working with Hope at Forrester, he would be able to see Steffy more.  Steffy is just torn all up on the inside because she keeps thinking about Bill’s threat to send her mother Taylor to jail if she married Liam.  Steffy stands there looking at the new picture hanging of her & Liam hanging on the wall.  Liam tells Steffy that he does that too, and it makes him think of how Steffy never gave up faith that she and Liam would reunite.  When Steffy turns around she has tears in her eyes.  Steffy walks away, and Liam follows her, telling her that he wants to make things official as soon as possible.  Steffy turns to Liam, and tells Liam that she just needs some time.  Of course Liam is confused by what she needs time for, he thought she was all in.  Steffy thinks back to her mom’s visit, and her mom telling her that if Bill send her to jail, she would never survive.  Bill’s blackmail has evidently worked again.  Liam has his hand of Steffy’s face, and a bewildered Liam cannot understand why Steffy is moving his hand away from her face.  This is how today’s episode ends folks!

Oh, I almost forgot about Justin Barber visiting Bill at the office.  I know that Justin has done some pretty bad things in the past, especially for Bill, but I almost think Justin has grown a conscious.  Bill tells Justin that he has already gone to see Steffy.  As a matter of fact, we learn that was Bill’s first stop.  Justin asked Bill if he went there to see his beautiful granddaughter.  Bill admits to Justin that he went there to see Steffy, but he got to see his granddaughter also.  Justin lights in on Bill telling him that the only reason he should be visiting Steffy was to spoil his new granddaughter.  Bill told Justin that he went to Steffy’s to discuss a business proposition with her.  However, Bill doesn’t mention to Justin that the business proposition was actually to blackmail Steffy to be his.  Justin tries to talk to Bill about his niece Emma, and how Maya has been giving Emma a hard time because she is Justin’s niece, and she was caught taking pictures of Hope’s new line.  Bill is just not wanting to talk to Justin about anything but Steffy, and Justin makes his opinion about that clear.  Justin doesn’t agree with that.  I think Justin may be trying to turn a new leaf.

Well B&B fans that does it for today and this week’s review of the Bold & the Beautiful.  Join me again on Monday as I review the next episode of the Bold & the Beautiful.  Have a great weekend guys, and don’t forget to visit the site so you can blog about your thoughts on what is going to happen with this love quadrilateral going on.  I myself am leaning to what the spoilers are saying about Steffy and Bill ending up married soon.  I guess we will just have to wait and see!