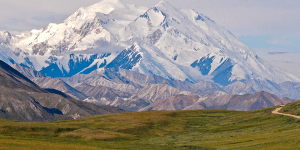 Informative Essay by my little Adam

Alaska became the 49th state of the United States on January 3, 1959.  Alaska, northwest of Canada, is the largest and most sparsely populated U. S. state.  It’s known for its diverse terrain of open spaces, mountains, and forests, with abundant wildlife and many small towns.  Alaska is a perfect destination for outdoor activities, such as skiing, mountain biking, and kayaking.  The Massive Denali National Park is home to Denali (formerly called Mount McKinley) North America’s highest peak.

The capital of Alaska is Juneau.  In 2016, Alaska had a population of 741,894 people.  Alaska is located in the Northwest extremity of North America with approximated 33% of the state located in the Arctic Circle.  The state motto of Alaska is “North to the Future.” Alaska’s state bird is called the Willow Ptarmigan.  The state tree of Alaska is the Picea Sitchensis, and the state flower is called the Myosotis Alpestris.  Anchorage is Alaska’s largest city with a population of 298,695 residents as of 2015.

The top-rated 10 tourist attractions in Alaska are:

Last but not least, here is a list of fun facts about Alaska that you may not know:

i found a nice video on youtube you can watch about Alaska :