Dominica or Dominique is an island republic.  Dominica is officially known as Commonwealth of Dominica.  Dominica’s location is 15 degrees North latitude and 61 degrees West longitude.  The island sits midway along the Eastern Caribbean archipelago, just a few miles from Martinique to the south and Guadeloupe to the north.  The capital of Dominica is Roseau and is located on the leeward side of the island.  It is part of the Windward Islands in the Lesser Antilles archipelago in the Caribbean Sea.  The area of Dominica is 750 km squared, and its highest point is Morne Diablotins, at 1,477 meters in elevation.  In 2011 the population was 71,293 and in 2016 the population was estimated as 73,543.  The currency of Dominica is the East Caribbean dollar, XCD.  The country’s time zone is Easter Caribbean time, UTC-4.  The official language spoken in Dominica is English.

Dominica’s precolonial indigenous inhabitants were the Island Carib people.  They had named the country Wai’tu Kabuli, which means “Tall is her body.” Christopher Columbus, sailing for Spain, named the island as Dominica, after the Latin term dies Dominica for Sunday, the day on which the Spanish first saw it in November 1493.  Some Spanish colonizers settled here, but as European explorers and settlers entered the region, indigenous refugees from surrounding island settled Dominica and push out the Spanish settlers.

Spain had little success in colonizing Antilles” for France, but no physical occupation took place.  Between 1642 and 1650, French missionary Raymond Breton became the first regular European visitor to the island. 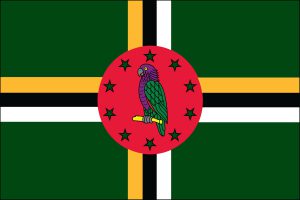 In 1660, the French and English agrees that Dominica and St. Vincent should not be settles but left to the Carib as neutral territory.  However, its natural resources attracted expeditions of English and French foresters, who began harvesting timber.  In 1690, the French established their first permanent settlements.  French woodcutters from Martinique and Guadeloupe began to set up timber camps to supply the French islands with wood, and they gradually became permanent settlers.  They brought the first enslaved Africans from West Africa to Dominque, as they called it in French.

In 1761, during the Seven Years’ War in Europe, a British expedition against Dominica led by Andrew Rollo conquered the island, along with several other Caribbean islands.  In 1763, France had lost the war and ceded the island to Great Britain under the Treaty of Paris.   The same year, the British established a legislative assembly, with only European colonists represented.  French remained the official language, but Antillean Creole, which had developed from it, was spoken by most of the population.

In 1778 the French, with the active co-operation of the population, began the Invasion of Dominica.  This was ended by the Treaty of Paris in 1783, which returned the island to British control.  The island population, especially the class of free people of color, resisted British restriction.  The British retained control through French invasion in 1795 and 1805, the first taking place during the period of the Haitian Revolution, which gained the independence of Haiti, formerly Saint Dominique.

Great Britain established a small colony in 1805.  It used Dominica as part of the triangular trade, by which slaves were imported and sold as labor in the islands as part of a trade that included producing and shipping sugar and coffee as commodity crops to Europe.  In January 1814, 20 slaves absconded from Hillsborough.  They were recorded as recaptured and punished with 100 lashes applied to the males and 50 for the females.

In 1831, reflecting a liberalization of official British racial attitudes, the Brown Privilege Bill conferred political and social rights on free black.  With the Slavery Abolition Act of 1833, Britain ended the institution of slavery throughout its empire, except in India, where it was considered part of the culture.

Dominica gained their independence on March 1, 1967 by the Associated Statehood Act of 1967.

Dominica’s economy consists mainly of international trade, financial services industry, economic citizenship program, and tourism. For international trade Dominica is a beneficiary of the Caribbean Basin Initiative that grants duty-free entry into the United States for many goods.  Dominica also belongs to the predominantly English-speaking Caribbean Community, the Single Market and Economy, and the Organization of Eastern Caribbean States.

The Commonwealth of Dominica is becoming in recent years a major international financial center.  The largest sectors are offshore banking, payment processing companies, and general corporate activities.  The Financial Service Unit of the Commonwealth of Dominica regulates and supervises the financial services industry.  There are a number of service providers.  Some of these include global financial institutions including Scotiabank, Royal Bank of Canada, Cathedral Investment Bank, First Caribbean International Bank, and The Interoceanic Bank of the Caribbean.

The Commonwealth of Dominica offers an official and legally mandated economic citizenship to those seeking a valid second passport.  The nationality law of Dominica authorizes the government to waive the normal requirement of seven years of legal residence to acquire citizenship in exchange for cash contribution.  Total costs excluding all fees for a single applicant are $100,000, with a discount for additional passports for spouses and children. Alternatively, since 2014, applicants can make a $200,000 real estate investment, in which case the cost of citizenship is $50,000.  According to officials, the citizenship program was an economic and fiscal lifeline in the aftermath of Tropical Storm Erika, and its new investment option had become the main source of Foreign Direct Investment into Dominico by early 2016.

Another part of Dominica’s economy is tourism.  However, since Dominica is mostly volcanic and has few beaches, tourism has developed more slowly than on neighboring islands.  Nevertheless, Dominica’s mountains, rainforests, freshwater lakes, hot springs, waterfalls, and diving spots make it an attractive eco-tourism destination.  Cruise ship stopovers have increased following the development of modern docking and waterfront facilities in Roseau.

Dominica is a parliamentary democracy within the Commonwealth of Nations.  The capital is Roseau.  The Commonwealth of Dominica is one of the Caribbean’s few republics.  The president is the head of state, while executive power rests with the cabinet, headed by the prime minister.  The unicameral parliament consists of the 30-member House of Assembly, which consists of 21 directly elected members and nine senators, who ay either be appointed by the president or elected by other members of the House of Assembly.  Dominica is also a member of the International Criminal Court with a Bilateral Immunity Agreement of protection for the US military, as covered under Article 98.  In January 2008 Dominica joined the Bolivarian Alternative for the Americas.  Dominica is divided into 10 parishes.  These parishes are Saint Andrew Parish; Saint David Parish, Saint George Parish, Saint John Parish, Saint Joseph Parish, Saint Luke Parish, Saint Mark Parish, Saint Patrick Parish, Saint Paul Parish, and Saint Peter Parish.

Dominica is home to a wide variety of people.  Although it was historically occupied by several native tribes, the Arawak and Carib tribes occupied it at the time European settlers reached the island.  “Massacre” is a name of a river dedicated to the murders of the Native villagers by English settlers.  Both the French and the British tried to claim the island and imported slaves from Africa for labor.  The remaining Caribs now live on a 3,700-acre territory on the east coast of the island.  They elect their own chief.  The mix of cultures has produced the current culture.  The ethnic groups of the country today are 86.6% Black; 9.1% Mixed; 2.9% Indigenous; 1.3% Other; and 0.2% Unspecified. 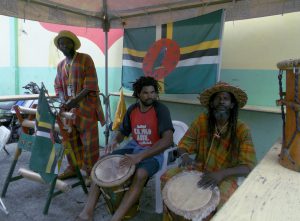 Music and dance are important facets of Dominica’s culture.  The annual independence celebrations display a variety of traditional song and dance.  Sine 1997, there have also been weeks of Creole festivals, such as “Creole in the Park” and the “World Creole Music Festival.” Dominica gained prominence on the international music stage when in 1973, Gordon Henderson founded the group Exile One and an original musical genre, which he coined “Cadence-lypso.” The famous novelist Jean Rys was born and raised in Dominica, and most of the Walt Disney film Pirates of the Caribbean:  Dead Man’s Chest was shot on location on Dominica.

Breakfast is an important daily meal, typically including salt fish, dried and salter codfish and “bakes” which is fried dough.  Common vegetables include plantains, tanias, yams, potatoes, rice and peas.  Meat and poultry typically eaten include chicken, beef, and fish.

Dominica is largely covered by rainforest and is home to the world’s second-largest hot spring, Boiling Lake.  Dominica also has many waterfalls, springs, and rivers.  The Calabashes area in the country’s northeast has sandy beached.  Some plants and animals thought to be extinct on surrounding islands can still be found in Dominica’s forests.  The island has several protected areas, including Cabriites National Park, as well as 365 rivers.

Morne Trois Pitons National Park is a tropical forest blended with volcanic features.  It was recognized as a World Heritage Site on April 4, 1995, a distinction it shares with four other Caribbean islands. 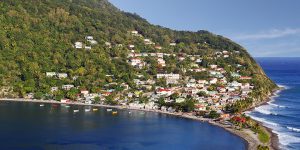 As a result of Dominica’s spectacular natural surroundings, it is nicknamed “The Nature Island of the Caribbean.” It is the youngest island in the Lesser Antilles and is in fact it is still being formed by geothermal-volcanic activity.  The island has beautiful mountainous rainforests, and it is the home of many rare plants, animals, and bird species.  There are xeric areas in some of the western coastal regions, but heavy rainfall occurs inland.  The Sisserou parrot, also known as the imperial amazon and can be found only on Dominica, is the island’s national bird and featured on the national flag.